How Many Types of Cataracts Are There?

The most common type of cataract. This type of cataract begins with a gradual hardening and yellowing of the center of the lens called the nucleus. This hardening gradually expands to the other layers of the lens. Nuclear Cataracts cause light to scatter when it passes through the lens, which decreases the amount of light reaching the retina. If left untreated, these symptoms will increase in severity, eventually leading to severe vision loss.

Cataract surgery is a commonly performed procedure that will restore your sight. If you have questions about Nuclear Cataracts or cataract surgery, schedule a consultation with us today!

A Posterior Subcapsular Cataract is an opaque area that forms at the back of the lens and can lead to a gradual decrease in vision. An early Posterior Subcapsular Cataract may not cause any symptoms. However, this type of cataract can grow more rapidly than other types of cataracts and can sometimes cause a significant decrease in vision in a matter of months. As the cataract grows, it causes light entering the eye to scatter, increasing the severity of symptoms. It can make it difficult to see in bright light or while reading and cause glare or halos around lights at night.

Cortical Cataracts begin as a small spoke-like opacity along the edge of the lens. These cataracts then gradually grow around the edge of the lens, while also slowly moving in toward the center. Cortical Cataracts cause light to scatter when it passes through the lens, which decreases the amount of light reaching the retina. This type of cataract can be a hindrance in a dimly lit environment. If left untreated, these symptoms may increase in severity, eventually leading to severe vision loss.

Cataract surgery is a commonly performed procedure that will restore your sight. If you have questions about Cortical Cataracts or cataract surgery, schedule a consultation with us today! 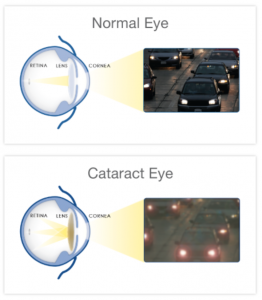 A cataract is a clouding that develops in the crystalline lens of the eye or in its envelope, varying in degree from slight to complete opacity and obstructing the passage of light. Early in the development of age-related cataract, the power of the lens may be increased, causing near-sightedness (myopia), and the gradual yellowing and opacification of the lens may reduce the perception of blue colors. Cataracts typically progress slowly to cause vision loss, and are potentially blinding if untreated. The condition usually affects both eyes, but almost always one eye is affected earlier, and more severely, than the other.

Occurring in the elderly, a Senile Cataract is characterized by an initial opacity in the lens, subsequent swelling of the lens, and finally shrinkage with complete loss of transparency. With time, the cataract cortex liquefies to form a milky white fluid in a Morgagnian cataract, which can cause severe inflammation if the lens capsule ruptures and leaks.

Untreated, this type of cataract can cause phacomorphic glaucoma. Advanced cataracts can become dislocated to the front or back of the eye. In ancient times, some spontaneous posterior dislocations were regarded as a blessing from the heavens, because some perception of light was restored in cataract patients.

Cataracts can sometimes form after eye surgery for other vision problems such as glaucoma. Cataracts may also develop as a side effect of other health problems such as diabetes. Secondary cataracts have been linked to steroid use and other risky behaviors.

Cataracts can develop after an eye injury, sometimes years later. Accidents and injuries early in life may manifest themselves as cataracts as the individual grows older.

Some babies are born with cataracts or develop them in childhood, often in both eyes. These cataracts may be so small that they do not affect vision. If they do affect the vision, the lenses may need to be removed. Children may develop congenital cataracts before or just after birth but these are usually dealt with very differently from cataracts in adults.

Cataracts can develop after exposure to some types of radiation including x-rays and gamma radiation. Radiation causes a variety of health issues in addition to the increased risk of cataracts.

Also, check out our Cataract FAQs for answers to other frequently asked questions about cataract surgery.